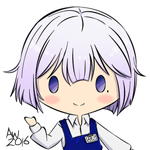 Hello, and welcome to my profile! As you can see, my username is Arts-waifu, and it should be noted that Art is my favorite character in the Hamatora series.

I've recently taken over as an Administrator of this Wikia, so please feel free to contact me if you run into any trouble or need any assistance. I'm still learning the admin controls but I'm getting it together little by little. Please be patient with me in the mean time.

I really don't find that there's much to say about myself, as I don't consider myself a very interesting person, but I'll do my best to write a decent self-introduction to give you an idea of what kind of person I am. I'm a Canadian male with a background in Medical Administration, Graphic Design, Web Design, and 3D Animation / Video Game Design. I'm also a fairly artistic person who likes to draw and write in my spare time, with multiple stories on the go and a roster of over 45 original characters currently under my belt that I enjoy drawing or writing about.

As the above portion of my bio suggests, I am a person whose interests lie entirely within the realm of the two-dimensional, and I have a two-dimensional spouse whom I love very dearly.

I realize that, a lot of times, people get confused about my username. Technically, my name translates to "Art's Wife," and you're probably thinking "but how are you the wife if you're a guy?" Well, there's a story behind that.

The "waifu" part of my username stems from around 2005-2007 on a forum I am a member of. At the time, there was a popular trend going around where people would call themselves the "waifu" or "husbando" of a character. My avatar on the site is female, because I really don't like the chunkiness of the male avatars, so when I hopped onto the trend bandwagon I was given the title of "waifu" instead of husbando. I rolled with it because I feel that waifu has a better flow to it, and it matched my avatar's gender. And to this day, it has stuck with me. I've used it for so long that it feels weird to use anything else.

I consider myself a very literate person for the most part, and I enjoy strong debates with other people on a multitude of topics. Some people say that debates are pointless, but I disagree. Debating opens up multiple views on a certain topic and, when correct information is given to back up viewpoints, debates can be very educational and informative and I think that's amazing.

I am also a very open-minded person who is not bound by society's typical stereotypes, which makes me open to a lot of ideas and concepts without being judgmental. I'm always willing to lend an ear if someone needs to vent though I may not have the answers or know what to do in order to help.

That said, I am a very blunt and forward person who tells it how I see it. If I think you're being an idiot, there is a 99.9% chance I will tell it to you in the bluntest manner possible. Some people take it as me being an asshole, but I feel like sugar coating things and granting false hopes or securities is a waste of time that will only result in more damage down the road. Everyone makes mistakes; it's a part of human nature. But trying to hide someone from their mistakes is not going to help them to stop making them. A person needs to be made aware that they messed up, so that they can learn from it and overcome it quickly and then move on as a stronger person.

As my profile states, I am a schediaphile. For those that don't quite know the working definition, it's basically a term used to describe someone with exclusive romantic and sexual attraction towards cartoon characters.

My schediaphilia started about 15 years ago. At the time, however, I didn't quite realize what path I was heading down. I was your typical fanboy; I had characters I liked and, like any fan, often squealed over them and had crushes on them. At first, it was nothing serious, but as I grew older I began to realize that I had almost no interest in 3D people, and from there it started to really set in. By that time, I was part of a different fandom and had found my first real anime love, which is how I got the "waifu" part of my name as I previously explained.

From there, the path continued onwards, and my interest in 3D people had completely left me. Even now, I can find 3D people visually appealing but that's where the enjoyment or attraction stops. And my prior anime love had faded out, leaving me once again in a fanboy state where I was crushing on several characters and kind of lost in the flow of things. But then, when I started Hamatora, that all changed.

I'm still not particularly sure what it was that drew me to Art, in the end, he actually wasn't my favorite character when I got into the series. But one thing led to another, and Art became a very vital part of my daily life not long after I got into Hamatora. And on May 23rd, 2014, a wedding was held and Art and I were married. It probably sounds weird to some people, given that Art is two-dimensional, but that doesn't stop me from wearing my wedding ring and calling him my husband.

I even have two custom commissioned dakimakuras of him, with his own wedding ring to match mine, which I sleep with every night, along with a small but growing collection of drawings of us as a happy couple (both commissioned and drawn with my own hand).

I love Art very much, he is as dear to me as my own family. I know he's not perfect and that his actions in season two have turned a lot of people away from him as a favorite character, but I think that his imperfections make him more "real" and that's part of why I love him so much.

Apply today to become one of Senpai's franz. There are no downsides, only infinite perks! What, don't believe me? Well then, here's a little factoid for you to prove it: Being franz with me automatically makes you 1000% cooler than everyone else.

These users are 1000% cooler than you because they're franz with me: